Thanks to greater awareness about the way dogs learn, many people are beginning to understand the value of socializing their dog.  We have all heard that dogs who are better socialized usually live happier lives.  But what, exactly, does socialization mean and is a dog park really good for socializing your dog?

There are two times most people use the term socialization in terms of off-leash play. One is when the owner has a puppy who hasn’t played much with other dogs, and the other is when an owner has an older dog that doesn’t particularly like other dogs.

If you have a puppy 3-6 months of age, socialization is very important.  Socialization involves gradually exposing a puppy to things in a way that allow the puppy to learn what is normal in the world. Generally speaking, what a puppy is exposed to when he is 4 months and younger tends to have a long lasting impression.  But it’s important to  keep in mind that both positive and negative experiences are going to stick with the puppy.

The key to proper socialization is making sure the puppy has positive experiences. Puppies from 3-6 months can definitely benefit from off-leash play, but they can also be easily traumatized if not put with the proper playmates. 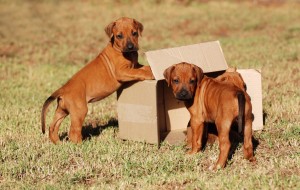 Proper socialization of a puppy involves controlling the environment in a way that ensures the puppy has fun and isn’t traumatized or overwhelmed by other dogs. Your puppy should be introduced only to dogs that you know get along well with puppies (not all adult dogs enjoy the antics of young dogs).  Initially you should also avoid large playgroups so your puppy has time to adjust to new dogs and how they interact.  Your puppy should meet dogs that are an appropriate size.  Avoid putting a small puppy in with dogs that are twice as large as him.  So before heading to the dog park with your new puppy do your homework to find a less busy time and supervise his playmate choices closely.

If your puppy chooses to avoid other dogs, then a dog park setting may not be the best socialization.  Rather than having a positive experience, your dog is learning that off-leash play is scary. The puppy that avoids all the other dogs in the dog park isn’t necessarily a “calm puppy that enjoys the company of other dogs.”  It’s more likely that it’s a puppy that prefers not to be around dogs and that is the reason he’s actively avoiding them at the dog park.  Find other activities that your puppy might like better or find an excellent dog daycare that can provide the right off-leash play environment with the right supervision for your puppy.

For owners of older dogs

As dogs mature it is not uncommon for them to want to play less with other dogs.  Additionally, as they mature, many dogs become more confident and are more likely to lunge or bark at dogs they don’t know.

Dogs grow into not “out of” aggression and it’s not uncommon to start to see aggressive displays in dogs when they hit developmental stages at 7 months, 18 months and/or 2 years.

Well meaning owners who are worried their dog doesn’t like other dogs often want to take them to a dog park. They hope to socialize their pet with other dogs so that it will teach their dog to enjoy the company of other dogs.  However, this plan will generally backfire. 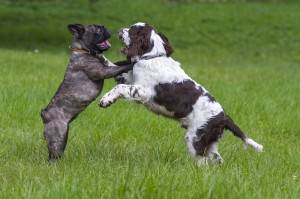 As we mentioned in the section on puppies, socialization usually refers to the learning that occurs in a puppy that is exploring his world.  An adult dog has already formed a view of the world and you are now at a point where perhaps you need to change his mind about some things (such as teaching him dogs are nice and he shouldn’t lunge and bark at them).  This is not something you can usually accomplish through exposure to dogs at a dog park.

Let’s use an example…if you are afraid of spiders, will simply exposing you to a whole bunch of them help you overcome your fear?  Probably not.  The same is true of dogs.  If you have an adult dog who doesn’t get along well with other dogs, then exposure might be needed, but it must be accomplished in conjunction with a well-structured behavior and training program.  Any good training program is going to involve a very structured off-leash environment that is usually just not possible at the average dog park or daycare. If you can’t manage the other dogs that are near your dog, then you can’t provide a healthy way for your dog to learn that other dogs are safe.

Dog parks can be great places for dogs that enjoy off leash play.  But they can be horrible places for dogs that don’t enjoy it.  The bottom line is that regardless of where you take your dog to play, he needs to leave the place behaviorally better than when he arrived.  If that can’t happen at the dog park, then have your dog evaluated at a well-run daycare or take your dog on a walk with just the two of you…you’ll both be much happier.

Hot Weather Safety for Pet Facilities
Next Post: How do I find a Good Trainer, Daycare, or Kennel?